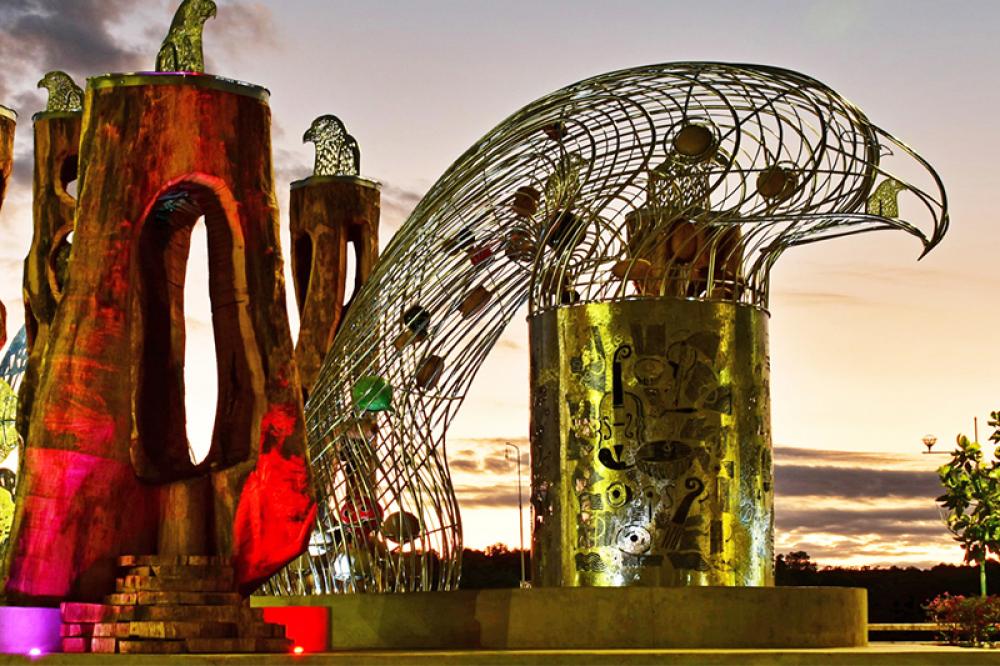 Krabi Riverside and Thara Park
Krabi Riverside walk is a large manmade footpath starting at Chao Fah Park – where the Chao Fah Night Market is held every evening – and finishing at the southern end of Thara Park and sports complex. The promenade is best visited at the end of afternoon when the temperatures cool down a bit as it offers a nice and tranquil stroll along the river caressed by the Andaman Sea breezes into which the Krabi River (‘Pak Nam Krabi’ – Krabi Estuary) flows. The River walk is approximately 1.6km long; the first two-thirds of the walk is a concrete footpath going through small garden parcels nicely landscaped by Krabi municipality gardeners. The last third part starts at Thara Park and is sheltered by tall tropical almond trees. The area also hosts the Krabi River Marina and a few local seafood restaurants.
Thara Park & Krabi River Marina
Some 100m before reaching Thara Park and its sports complex, visitors will discover a small contemporary style marina which is a recent addition here. There is a nicely landscaped garden built around a metal monument symbolizing the typical limestone cliffs found in the region and a few outlets selling sailing and sea-related articles, as well as a rather large modern restaurant – The Terrace – that overlooks the marina and the river. Thara Park itself is a cool place where you can meander through a maze of walking trails, relax by a pond, run laps, play tennis or football, watch the boat traffic drift by, or test your mastery of the Thai alphabet in the children's statue park. A 7-Eleven and three Thai seafood restaurants are set along the road between the park and the river. At the end of the Krabi River Walk, in the middle of the estuary lies the aptly named Koh Klang (Middle Island in Thai which hosts Islanda Village Resort) which is surrounded – like most of Krabi River estuary – by mangrove forest. This area is popular with birdwatchers that can spot rare bird species such as the masked finfoot and the brown-winged kingfisher to name just a few.
Krabi River
The Krabi River – ‘Maenam Krabi’ in Thai – originates at Phanom Mountain about 30km north of Krabi Town. Khao Phanom Bencha is a 50sqm national park featuring numerous waterfalls (including Huai To; an 80m five-cascade waterfall; caves (Khao Pheung is one of the most famous caves in the area); virgin rainforest, and rare wildlife. At the northern entrance of Krabi Town, the western bank of the river features the city landmark of Khao Khanab Nam – two limestone hills located in the backyard of Maritime Park & Spa Resort. Khao Khanab Nam hosts caves with beautiful cluster formations of stalagmites and stalactites created over thousands of years, alongside prehistoric paintings. This landmark can be visited by long-tail boat starting from Chao Fah Park/Pier.

STAY TUNED WITH US

Get our updated offers, discounts, events and much more!